Ever fantasize about what it would be like to attend Hogwarts? The School of Wizadry for real? Me too. One can’t help but feel that it most likely won’t have much to do with wands holcruxes or flying brooms if the idea were real in the here-now modern world. Not enough time to get too into it now but…
Time. Dare we go there. Or even contemplate it for that matter. For want of brevity allow me to cut to the chase and confess that I deliberately do not want to spend much time now doing anything other than continuing to study and practice using these incredible tools while still here in the space, makes sense. (I also don’t find typing on a miniature little iphone keyboard the most efficient method of downloading ideas).
Of course I also desire to share, fearing that I may forget something that might be of interest or import to myself or another, if only one… And yes, i see/feel/get how funny that sounds – as if there were “something so important that we may forget” in the world other than “I am not I nor I am, though I may be I am the I am that creates I am, and yet maybe not”… And there it is in a nutshell isnt it?
So. Pardon my recent silence, know that I am still here, that I am taking notes (and taking note) of it all and will return soon to share more at some point soon.
In case the thought occurred to you, in reference to time… when we first contemplate going to any sort of “course”, be it Avatar or anything else, (even a vacation one assumes), one of the first things we do is ponder whether or not we have enough time; similar to how we consider whether or not w have enough money etc. A 14 day “course” seems daunting at first, I know. In the world 14 days may seem like an eternity to spend “on a course” compared to “all the important things I have to do this year”. I’m with you. Been there. Each and every year I plan to attend this course actually.
But it never ceases to amaze me how long the 14 day Wizards Course seems to appear a month or two before I arrive — feeling as though there is no possible reason I could have to spend that much time working on “my creations” or those of the world, and then how rushed for time we feel once here and settled in — as if we could easily spend another 14 days exploring expanding cleaning and clearing and still be ready for more.
Consciousness appears to have an infinite unlimited and inexhaustible supply of creations available for us to play with. (And yet we know that it doesn’t… ) Point being that if you’re sticking point is “what the hell does one do with all that time?” — not to worry; there is plenty to do. Once you widen back relax and feel safe enough to start being open honest and vulnerable with yourself. Clarity sets in. (though it was there all along). We just deliberately create that “it’s ok to feel like this”. Long story short that’s why one may have that feeling of “holy cow the Course is gonna end in less than a week and I’m just getting started!”
Allora. Back to the original question. Ever fantasize about what it would be like to attend Hogwarts School of Wizadry for real? Me too. How can one resist? There’s a reason why the “Harry Potter” movies are now the “most successful film franchise of all time globally”. They’ve surpassed Star Wars. (of course there were like 7 or 8 of them… That’s a slightly unfair advantage. But then again there are like 20 or 30 “Chucky” movies and they’ve never exactly broken at the box office … say no more…)
Lightly floating about this gigantic collection of nearly 4,000 “Wizards” from all over the world over the last 8 days I can’t help but keep thinking how similar this experience is to a real rather than fictional modern day Hogwarts School of Wizardry. Look at the picture attached. I’ll post more as we continue. There’s no way to actually capture the entire room full of everyone here in one shot. But you can get a good idea from just zooming in and out and looking at the thousands of various little groups doing their thing. Each and every person here to do nothing but work in consciousness. It’s a powerful idea to fathom.
I heard it expressed quite well this morning: “Do you realize there is nothing in the world of this kind (or size) happening anywhere else in the world? Never has been from what we know of… It’s nice that you’re here.” Well it’s nice to be here, thank you. More later. Love… 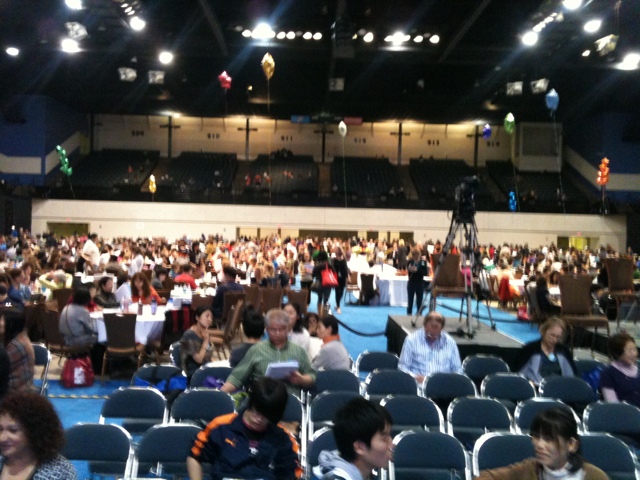