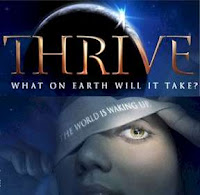 Yep. Yours truly finally got the chance to sit down and watch some of the movie THRIVE that everyone has been buzzing about over the last few months. I must say right upfront that if this kind of thing just happens to be your “kind of thing” then, like myself, you aren’t necessarily going to find anything new in this film. But you’ll love it just the same. I myself can now sleep. For the first time since observing and predicting that we were shifting into a new age, one I started calling “The Personal Expression Age” in 2004 for the book bearing the same title, I feel like I have finally seen something that truly has the potential to push us over the edge. So yes, it’s that important. Regardless of how much of it you may already know. It’s a damn good flick. One that has the potential to turn into an even cooler movement, or even better help the many movements already in existence continue to grow and expand.
We already know who not so secretly (except to the masses) controls planet earth, that UFOs exist and are being hidden from the mainstream by the governing few, that the 9/11 attacks on the US were an inside job and a hoax perpetrated to start several wars for oil and Middle East dominance, that various free energy machines have existed since at least the early part of the 20th Century and that all you have to do is follow the money to see clearly that through surreptitious private banking cartels disguised as government treasury departments (The Federal Reserve), corrupt Big Oil companies, the so-called “world religions”, medical schools and health insurance systems designed and controlled by giant pharmaceutical companies with ignoble intentions and a few very wealthy and powerful families (Warburgs, Rothschilds, Rockefellers, Carnegies, et al.) and other power hungry groups (the British Royals, the Vatican) humankind is being controlled in a not so secret anymore pretend-democracy and has been for centuries. Cont.

So… It’s all an illusion so to speak, all these freedoms and liberties that free peoples everywhere believe they’ve got, and we’re still at best slaves to invisible rulers and perhaps even beings from other planets. The jury is still out on that last bit. But the story is the same. Whether it’s David Icke, Edgar Mitchel or Alex Jones, there’s not much in THRIVE that we don’t already know about.
But don’t let that stop you from watching this excellent movie. What makes the film worth watching is the fact that it does present the information in a new and relatively less “conspiracy theory” manner and it also features more mainstream guest speakers than the usual “let us turn you on to what’s really going on” type of underground films and documentaries that have come out over the last thirty years. It’s professional. Top notch. Grade A. A big budget production. Not a bunch of Birky-wearing dread-having vegans shouting at the top of their lungs that they want a revolution but they don’t know how their going to revolt without killing us all and sending us into an economic depression. Foster Gamble and his wife (the film’s creators) are well-thought out, responsible, intelligent and compassionate people. Frankly they make people like Alex Jones seem like ego-maniacal fruit loops. So from the Transcendence Diaries perspective, the recommendation is WATCH THIS MOVIE AS SOON AS YOU CAN. You’ll have a much better understanding of why the world around you is so messed up and why everything that seems to get done for the good in the world happens through people movements rather than through governments.
[On that point, regarding those inevitable last hold-outs who will invariably assert this last point is bs because “the United States gives more money to other countries in foreign aid than any other country on earth or in history”, let us also remember that the United States government ONLY does so IF the recipient country has already signed over their sovereignty and control over to the United States and has agreed to do whatever the Great Democratic Super-power has demanded of them regarding everything from their military to their water to their votes in the United Nations. Do your research. Keep digging and reading long enough and even the most patriotic among us will eventually see how it all works.]
Nope, it’s not good news. In fact it’s downright sad and disturbing to know what’s what and who’s who on planet earth. But the good news IS there, in movies like THRIVE and many others currently circling throughout the Personal Expression Age arena. People Power, we have now seen through the Arab Spring and the Occupy Movements exploding around the globe, CAN make a difference. One day “we the people” will truly self-govern — as our founding fathers and mothers once intended us to. It’s only a matter of time. As the Ambassador likes to say though, “If you’re not on the way, then you’re in the way.” So don’t be alarmed if you get passed you by or run over. We’ve all been warned. Numerous times. This isn’t the golden old days pre-internet. Anyone with half a brain by now has at least heard what’s really going on. Any last hold-outs just need to continue to be fed the truth and not the TV, radio, newspapers, magazines or any other forms of mainstream media.