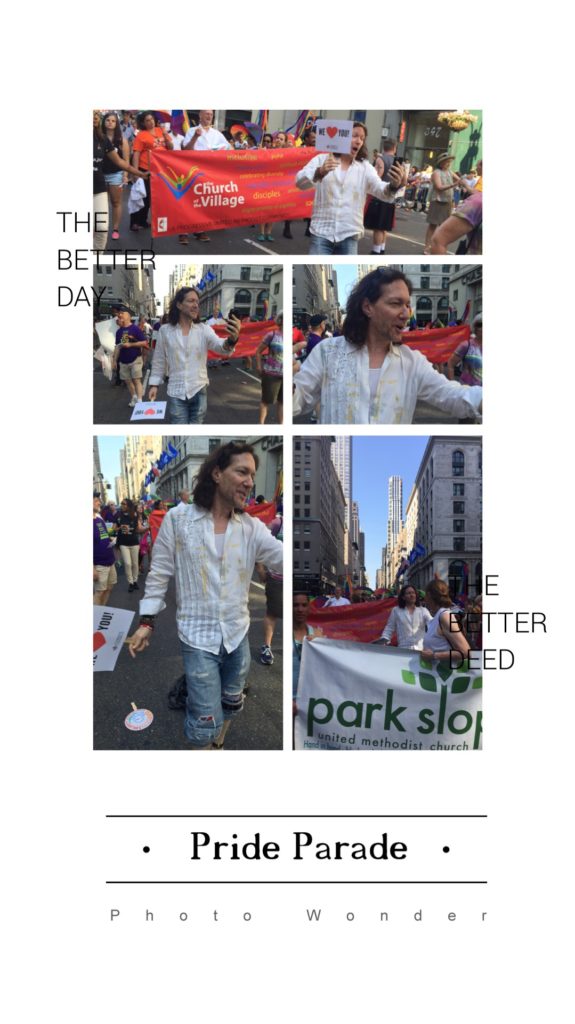 It’s interesting to me that both of these — being gay AND being Christian — are identities. And then I wonder – What is the value (or the agenda, perhaps?) in a public *display* of an identity? I’m thinking of the Avatar Masters’ Integrity Course materials….

Yeas, totally. Why bother spreading identities all over the place when it would be better for the enlightenment of the world to let loose with a whole lot of them so we can all become more idendentityless pure awareness so as to achieve less strife, drama and pain and instead increase peace and civility in the world… I’m with you. I get what you’re saying. Other than one being pure Source or staying in “Observe Mode”, it’s ALL identities.

For me, well thought-out (and/or FELT-out…), deliberate identities are how we navigate the day to day world as creative beings. (I’d personally LOVE to just float around in Observe all the time. Probably wouldn’t get much done (see LD book). But it would be fun. So we strap some on that we believe might help us shift the world in an aligned helpful direction… there… that feels good. And off we go to do our best to make the world, and ourselves and our friends and families lives better…The best that we can do.

Specifically about a few identities, I don’t believe that being gay (or most likely a few or all of the LGBTQ labels) is an identity as much as a genetic thing. In a broad sense, sure. I was born “male” and have exhibited a lot of male identity traits through the years (as well as a ton of female identity traits, much to the confusion of my family and friends through the years). And yes, when they’re not deliberate they can be impeding. But overall, I’ve got “maleness” down. And I’m comfortable with how I express that identity. I am after all “male”. So presenting various different aspects of “maleness” (identities) is pretty natural. (Again, especially when examined lovingly and objectively and worn deliberately.).

I feel the same way about people who are born “gay or straight”. If we look at being born “straight” for a second, PLENTY of people are born that way but have a TOUGH time dealing with all the identities that come with it. You know, sexuality and gender identification in general… It’s hard for all of us at first as we breathe forth from young adulthood into becoming full fledged lifers. So it’s not like “gay” people are THAT different really… We all struggle with these things. Identities. I guess more in which identities we choose to wear or which ones just seem to wear US, and how we present that to the world…..BUT…there does seem to be an exception for people who are currently and have been waving the PRIDE flag high. (I too gave this a lot of thought through the years — especially every time I attend a Pride parade…) Because they were being labeled so maliciously and with such prejudice, I believe that turning the potential “shame” that can come from those experiences into PRIDE, being proud to be gay, not shying away from it privately or publicly, gave them a newly born sense of, well, pride, happiness, self respect, dignity. And voila it HAS worked! Gay is not so “bad” as it once was 20 to 30 years ago, or hell, even 10 years ago. They just let that flag fly and they changed consciousness. And in that respect, those public displays helped. The agenda was clean, the mission clear, And they’re damn close to accomplishing it. Everyone who has participated should feel proud.

What about the “being a christian” identity? Lord I know… for me personally that’s a tough one. Because I’m more the type who keeps that kind of thing on the DL. BUT every now and then I deliberately pull it out with a clean clear mission, an agenda if you will. Sometimes it’s to show a different side to the identity of “being Christian”. Hell, if I can’t show people that “all Christians aren’t the same, don’t think the same way”, then no one can. So as a gift to my community AND the larger community of all religious people, AND to the world at large (because let’s face it, a lot of pain and struggle stems from religion in our world still….) I put on the brave face and wear my religion/spirituality publicly and deliberately just as a way of showing that sometimes it can be a really groovy and beautiful scene being religious and being a part of that community. It’s a service.

And you know, while you have me thinking about it, I feel the same way about being an Avatar/Master/Wizard. Talk about self-consciousness! Going public with that identity at this stage of the game? Yikes. I’ve found it a challenge at times. And I’ve been one for more than 20 years. Since i was a kid. But I wear it proudly and talk about it freely whenever asked. And yeah sure one does bump up against the occasional lump of coal who wants to poo poo all things “self exploration” or “consciousness exploration or expansion”… they think it’s dumb or that it’s not possible to explore or expand consciousness, etc etc etc. Whatever. They’re old school though. Almost gone. Dinosaurs. We’re moving on. We already know what we’re doing and why. And it’s working.
I guess what I end up with is that a properly aligned well thought out, in feel, deliberately worn identity or two (or ten) can be of real service when one has a helpful mission or agenda in mind. (I know yesterday really brought up my self consciousness…had to stretch a lot to be so open like that…and yet I just felt that at this point in American consciousness it’s imperative that as many of us that can muster the courage who call ourselves practicing christians (and Avatars…) need to stand up to show the world that “hey some Christians are not only perfectly okay with the whole LGBT thing, but we support them and their mission to achieve equal rights just as any other citizen does. In the end that helps both groups.
Hope some of this makes sense….
-E