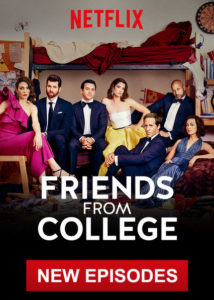 BUT more importantly their 24/7 open format, binge-ready batch delivery system and open mindedness to creativity has led to a true content (and delivery) revolution. (No i don’t get why the old networks haven’t caught on yet….) Friends From College showed that Netflix could step up and produce real content, quality network content if it really wanted to. Not just silly kids stuff. Ironically the show is a bit controversial on IMDB in that people either love it or loathe it. Like everything today for some reason. Why people profess to “loathe” the show in their reviews, I honestly have no idea. But it’s lighthearted and over the top take on the challenges and realities of friendship and growing up is often laugh out loud hilarious and moving. Especially if you see your own life mirrored back to you in the show’s intelligent and often witty writing and story lines. END_OF_DOCUMENT_TOKEN_TO_BE_REPLACED

Revered Disney Chief Officer Bob Iger made a simple statement this afternoon about his decision to cancel the new Roseanne series reboot on ABC based on her posting a rather racist comment on Twitter about former Obama White House advisor Valerie Jarret (weird, right?), saying “It took us about 2 hours to discuss the details. No time at all. Obviously a lot of people are going to lose their jobs because of Roseanne’s behavior and that’s never a good thing. But no, there’s no debate when it comes to doing what is morally right, at least not for us.”

It’s bold to stay committed to respect, basic human decency and the pursuit of noble goals in a society gone mad. So kudos to Mr. Iger. Was it fair? Well, that’s a debate that will probably rage on for years to come. But as long as the United States is still a capitalist democracy, hell yes it’s fair. Roseanne worked for Disney. Disney works for their shareholders, and they clearly know what said shareholders expect from them. Racism is not one of those things. In fact, one would be hard pressed to find anyone who delights in racism except for fringe elements of society. And though yes even their rights to free speech are protected, it doesn’t mean we have to hire them or even associate with them. Thank God for free market capitalism and democracy. If your check says Disney or ABC (one of its many subsidiaries) on it, then they have a right to fire you just as much as they do to hire you. Govern yourself accordingly.

What occurred to me at first was a little bit of shock  — Roseanne just recently returned to mainstream relevance after two decades of being largely ignored. I’m personally not a fan. But couldn’t help but be happy for her. But now this…? Always controversial, her comment today wasn’t a funny joke as much as just a dumb jab. Albeit a peculiar and random one (Valerie Jarret? Really?) with an overtly racist tone. But then again modern American comedy is filled with offensive and shocking vulgarity and racism. Its rampant. And literally unwatchable if you have more refined tastes. So what’s the difference here? The platform? Twitter versus Comedy Central? END_OF_DOCUMENT_TOKEN_TO_BE_REPLACED

At some point in 2006, the author of the Transcendence Diaries — sometimes known as Fishy or Tobias Guess — disappeared, or better put, stopped posting here in the Diaries. It wasn’t immediately clear why. In the meantime, singer-songwriter Ed Hale, being caught up in the filming of the new TV show Transcendent Television, began to get obsessed with YouTube, specifically using it as a new vehicle for blogging on his Transcendent Television YouTube channel. In 2011, the proverbial cat escaped from the bag and it was formally revealed that Ed Hale was indeed the author of the Transcendence Diaries. And hence the strange extended absence of newly written Diaries posts in the years 2006 to 2007 herein was explained. Hale went on YouTube as Ed Hale the recording artist and was excited about the new medium. But he did not want to reveal that he was the author of the Transcendence Diaries. So the two were completely separate entities and not connected in any way. Until now. Ed Hale recorded and uploaded nearly 100 video blogs to YouTube during that one year period. Along with an additional 100 new songs he was writing. So We’ve created a playlist that features all of the video uploads that could logically be said to be “blogs”, because in reality they really do belong here, and always did.

Caution might be noted here: though Ed Hale never held back from saying whatever he thought or felt when he was writing in the Diaries, and still doesn’t, which for some may be one of the more appealing aspects of the project, that same ideology and approach has a different tone and vibration when it is translated to video and the audible spoken word. It may be prudent to advise that some of the material could for some be easily offensive. Or not. But it’s been said at least. Bare in mind two things, number one, some of these entries go back a good fifteen years, before the world had become so politically correct, and two, The Ambassador is often joking around, except when he’s not (that distinction should be obvious), experimenting with a new medium and its potentialities, 99% of the time he’s riffing in real time with no script, just as he does in the Transcendence Diaries. If something seems offensive or politically incorrect or just too damn long, skip it.

Well we finally finished filming for the time being, and the initial editing stage. Definitely a lot more work than I realized going into it. I’m not sure what I expected going into this thing. As with most art for art’s sake I don’t know if I was doing too much thinking at all per se. There was just a lot to capture lately it seems — times are crazy; a lot to study and explore, and it seemed a good idea at the time to film it all. After that documentary that they filmed of the Nothing is Cohesive album and tour — that being the recently televised Everything is Cohesive (which can be seen here), I started to get used to the idea of filming everything. And if I was already constantly studying and researching various topics and travelling around to explore everything I found interesting or intriguing, why not film it all and turn it into some kind of film…. It makes sense.

Eventually the idea for Transcendent Television arose. From there it seemed easy. Just film everything. I honestly thought that doing something in TV or in documentary film would be easier than the music business, as difficult as the music business is. It sounds naïve now. The truth is that people who work in film and TV have just as much of a challenge, just as many obstacles and hurdles to jump over as we do in the music business. More really. And it’s a lot more expensive. (Okay that’s a maybe actually… making a new album from start to finish, and launching a tour, are both very expensive endeavors.) But there are definitely a lot more people needed in order to create visual art, or video content. Originally I was just live-filming everywhere I went and everything I did if it was cool or interesting, engaging or educational. Hell, sometimes even when it wasn’t cool or interesting to be fair. But that real time documentation of even the mundane seemed at the very least to be an intriguing concept for an art-film project.

Reality TV is in full bloom now and is taking over everywhere. It’s only a matter of time before technology catches up with us and enables us to be able to upload and host video content to the internet as well as TV. Hell, YouTube already enables it to a certain extent. It’ll take time for the tech to get there of course. Speed and bandwidth is slow and clunky now. But I wouldn’t be surprised to see live streaming of video content online at some point in the future, where everyone in the world has their own personal TV channel and is constantly broadcasting the day to day goings on of their life. It’ll happen. It’s the future.

I’m working on a book now, maybe a book, maybe a white paper, not sure yet, to express this thesis that we are entering this new age I just described above. I call it The Personal Expression Age. There’s a lot to it. I’ve observed collected and catalogued over 20 different Signatures that signal this new era and make it completely unique compared to any other time in human history. Just getting started on that though.

But that’s a different story. That’s where I started. Film everything. Break through the fourth wall a lot. Don’t worry about quality as much as content. Go for what’s real and genuine. But once the formal meetings with Peter and Kevin and the production staff started in New York, and they informed me just how complex and intricate the whole process was, it suddenly occurred to me that this wasn’t as easy and simple as I originally assumed. In reality you need 2 to 3 cameramen, a director, a boom mic operator, and sound team, production staff, logistics team… and that’s just to film content. Little did I know that once you were finished filming that you’d still need a whole team of editors to digitize all the footage and scroll through it and then piece it together in order to try creating something even semi-cohesive. From the moment we formally stopped filming (I never stopped myself… I’m still grabbing cameramen from Craigs List all the time and running out to shoot something no matter where I happen to be in the world…) and started the editing process, It took almost a full year for them to create episodes using the footage we had collected. Not a fast or easy process. But worth it.

Everything Is Cohesive — The Documentary
Journey of Dreams documentary about the musical group Ed Hale and the Transcendence that follows the band around on tour and in the studio that aired on public television in 2004 just before the release of their new CD Nothing is cohesive. Takes a look at past albums and individual band members share stories. Featuring interviews with the band and live footage.

Featuring the songs Dreams, Caetano, Sleep With You, You and Me, Jelly Roll, Veronica, Beautiful One, I’m not the only one, I wanna know ya and more.